Fullblood, Purebred, and Percentage Does

We believe that a doe should have strong maternal instincts, be structurally correct,  and ABGA show correct. We do our best to produce a functional animal that takes minimal input but carries the ability to produce competitive offspring for the show ring, and be an efficient dam in either our herd or for someone else.

​​TFBB Hot Kakes
Pedigree
e
​​Kakes has been an very instrumental part of our herd. Being a very consistent producer in the type and style of kids she produces for us, no matter whom she is bred to. She puts very elegant, up fronted does on the ground that are square out on the corners and stand on sound feet and good legs. Not to mention she has been a very prolific producer,  giving us two sets of triplets and one set of quads so far!

We have been blessed with some great quality show does out of Kakes and as of 2019, Kakes is very close to being ennobled based off of her progeny points!

​MDLF Mile High Girl​
Pedigree
Being a 2018 born daughter of TFBB Hot Kakes, Miley shows the consistency of style and elegance that Kakes is noted for producing. We are super pleased with this doe and how she fared in the 2018 show season earning 15 individual points and helping get her dam closer to ennoblement! 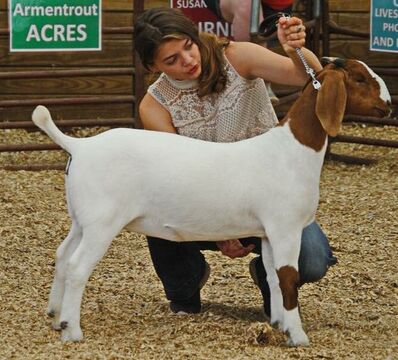 Pedigree
Secret is a the litter mate to Miley and wow what a doe! Her name was appropriately given as she was definitely our secret until she hit the show ring in the middle of the season in 2018. Very square, feminine doe with an incredible look at me presence.
With very limited showing, Secret earned 48 individual points and will be inspected prior to kidding.

We have high hopes that she will fall in her dam's footsteps and produce some quality kids for us!

Secret was live covered to Fireys Broken S You Even Lift Bro? (10826915) for March 2020 kids.
​3HAZE I'm No Angel
PEDIGREE
3HAZE I'm No Angel was purchased from Bryan Hazelbaker in the spring of 2018 and was added to our show string that year. Catching our eye for her extreme stylishness in the front end, huge rack, and amazing hip, we new right away that she would help accelerate our program.

Hazelbaker earned 107 individual points throughout the show season and placed 5th in her class at NAILE '18'!

​BRBB Hot Little Caddy
PEDIGREE
Caddy is a long bodied doe with adequate bone and stands on good feet and legs that she passes onto her offspring.
​LHF5 Fuzzett's Booty Baby
PEDIGREE
Booty is one of the easiest keeping does that we have, always maintains excellent body condition while nursing and bounces back super easily.
​AABG NBD Crystal Clear
PEDIGREE
We purchased Crystal in an online sale when Lary Duncan was downsizing and we must say, we absolutely love this doe!
With the fullblood wether genetics in her background, she was the perfect pick to play on both sides of the industry.

Crystal will be lap AI'd to AABG Outlandish *Ennobled* (10674397) in June 2019 for fall kids. *UPDATE* Crystal kidded at the beginning of November with an outstanding set of buck kids! 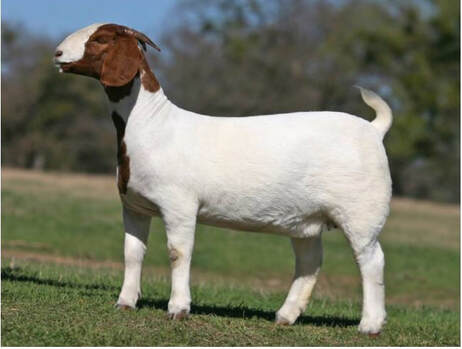 ​WCF12 Riding Free
PEDIGREE
Riding Free was purchased from Galen Steiner and his family in 2017. She is a lovely percentage doe that has an exquisite head and neck, with nice length of body. "Galen" earned 37 points during her show career with multiple Grand and Reserve Grand champion wins. 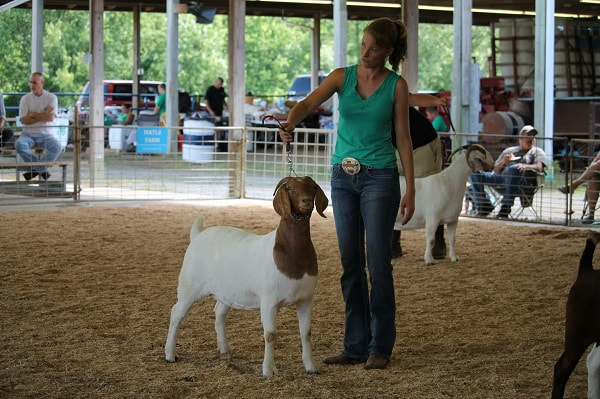 ​MDLF Simply Elegant
PEDIGREE
​Ellie was a twin who was born to our percentage doe WCF12 Riding Free. Unfortunately we lost her sister shortly after birth, and at the time we considered that the better of the two does. Boy were we wrong! Ellie was shown in 2018 and racked up an impressive 87 show points!

Ellie is a nice, deep bodied doe who has an incredible top and hip in her. Pairing that with how smooth she transitions out of her shoulder and her elegant neck, seems to be a sure bet her kids will be just as nice.
​ 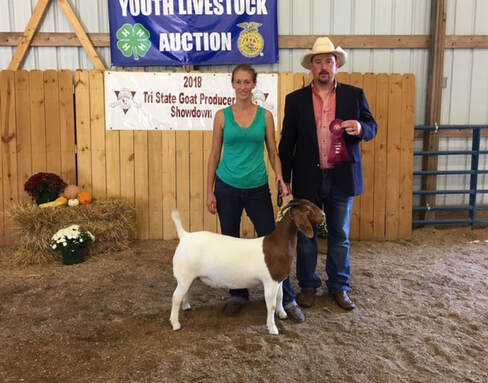 ​​Stillhouse Angels Among Us

​*Doe of Excellence*
​
PEDIGREE
When we ventured into boer goats our first two purchases were Angel and her sister. To me, this purchase has been a fairy tale type of story. Angel is a true 50% doe that was bred and bought from Amy Batson of Stillhouse Farm. With Amy's permission, we DNA'd Angel and her sister Gracie to determine who the sire was, then we proceeded with registering them.

Both does have been hands down two of our best producing dams. Having excellent udders and maternal abilities, they raise some of our biggest and best gaining kids on the farm. Are minimal maintenance type goats who thrive on little feed and have a strong parasitic resistance. Not to mention, Angel flat out, outproduces herself, EVERY TIME! So much so that Angel was just awarded Doe of Excellence in May of 2019 with points accumulated from just two doe kids.

We are super excited about the future and what Angel will continue to produce for us! ​

​​MDLF Gotta Have Faith
PEDIGREE
Faith has proven to be an excellent mother and producer just like her dam. In her first kid crop she raised kids that had adg's of .5 and above. Producing an ABGA point earner and the Heavy Weight Reserve Champion wether at the Tri-County Fair and the Summer Jam in 2018.
In 2019, she produced our highest selling wether in the Alliance Boer Goat online wether and doe sale!

​
MDLF Run In My Hose
PEDIGREE
Run is to date the best percentage doe we have produced. She has bone that can go on for days, stands on a big foot with good legs. Super square from her hooks to her pins, nice deep body, and stands out on all four corners. And check out that wedge shape she has!

In just two shows, she accumulated 79 points early in the 2019 show season, and is sitting at 175 points with two shows left for this year! We are beyond blessed with this doe and are super excited to see what the future holds for her. 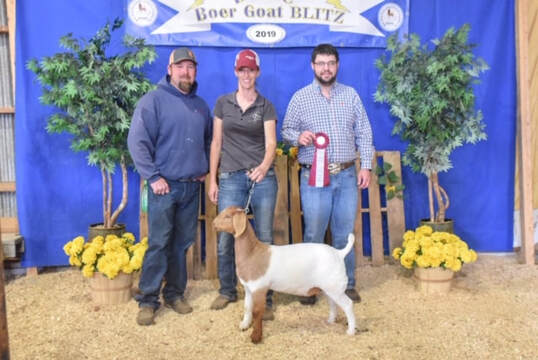 Stillhouse Grace Be Given
PEDIGREE
​Gracie and her sister Angel were the first two goats that we purchased when we began in 2014.

We are beyond pleased with her and the strong maternal abilities she possesses. In 2019, she raised a set of triplets on her own, with no supplementation to her kids. During this time she managed to not only raise the kids, but maintain a good body score along with having kids that had the second highest set of adg's on our farm.